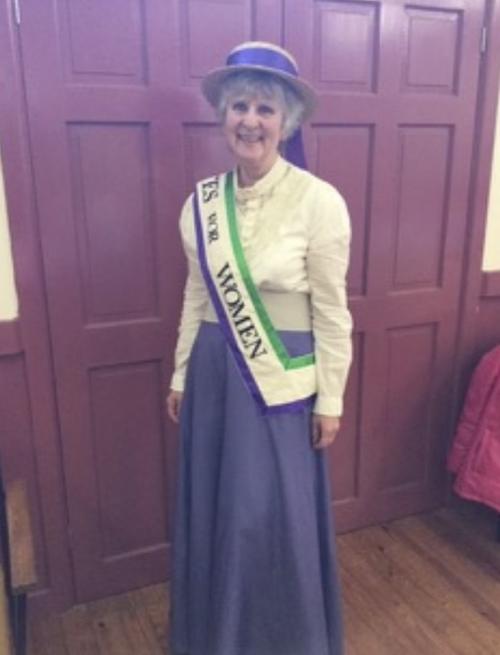 Breaking the Mould: The South West Suffragettes
A Talk by Pamela Vass: Whitecross Village Hall, 16 October
It was lovely to welcome so many to this face to face meeting and we spent a very interesting and informative afternoon in the company of Pamela Vass.
Born and raised in London, Pamela felt drawn to the West Country and after studying for her MA at Exeter University was to realise this may have been due to the fact her ancestors all hailed from this area. Her fiction and non-fiction work is based on the landscape and people of the West Country and her need to find out the truth, or otherwise, behind local stories. It was this need that drew her to a newspaper article referring to a house razed to the ground by fire – a fire thought to have been started by Suffragettes. She needed to find out the truth behind this mystery and her extensive research led to her book about Women’s Suffrage in the West Country. The working title for this book was ‘Fire in the Belly’ but a quick Google search found this to be the title of Larry Crofts’s book about Donald Trump’s ‘Ride into Washington on a White Horse’! A title change was in order —“Breaking the Mould”!
Breaking the Mould charts Women’s Suffrage from the First Women’s Suffrage Petition to Parliament in 1832 to the end of the war and just beyond when all women achieved the vote in 1928. Pamela’s passion for her subject really shone through during her talk and she carefully guided the listener through the twists, turns and complexities of Women’s Suffrage, exploring the local movement against the backdrop of the national movement — something I had never really thought about before and I was surprised to learn how active and organised the women of the West Country were to establish this right.
Her storytelling, aided by original footage, extracts from the the book, real life stories of the women involved and appearing in costume of the day, all helped to transport the listener back in time and to better understand the courage, passion and determination of all those involved to secure the right of women to vote.
Suzanne Goddard 18 October 2021

- ‘Fascinating People and their Association with Fowey’ by Lynn Goold Saturday 2.30pm 30 January 2021

- "What the Tudors did for Fowey" by Alex Lewis

- Some insights into Golant History

- Tywardreath Priory – The House on the Strand

- Trade and Tragedy in a West-country Seaport