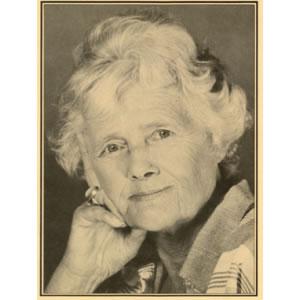 The middle daughter of Gerald and Muriel du Maurier, Daphne was born at Hampstead, London on 13th May 1907.  Daphne and her sisters Angela and Jean were educated at home by a private governess before she went to finishing school in Paris.  Her first novel The Loving Spirit was written at Ferryside, Bodinnick, the holiday home bought by her father in the 1920s.  The youngest major in the British Army, 'Boy' Browning, had read The Loving Spirit and came to Fowey to meet the author.  After a short courtship they were married at St Wyllow Church Lanteglos by Fowey.  On the morning of their wedding 19 July 1932 two boats left Ferryside at 8am, one with Daphne and her parents and the other with Major Browning and two witnesses (Hunkins) from Bodinnick.  They sailed up Pont Creek and alighted at the head of the creek and walked up through the woods to the Church.  The early start was to catch the tide.  Following their marriage they picked up his yacht Ygdrasil (Tree of Fate) and sailed away to Frenchmans Creek off the Helford River for their honeymoon.  Most famous for her novel Rebecca, she lived within three miles of Fowey for nearly 50 years of her life.  She rented Menabilly for nearly twenty five years before moving to Kilmarth where she lived for twenty five years until her death on April 19th 1989.