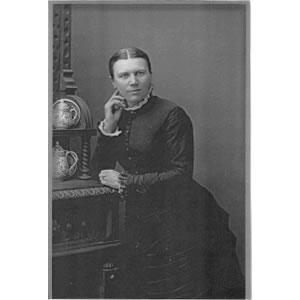 The rapid expansion of shipping in the harbour in the nineteenth century enabled large numbers of local residents to own shares including many women.  Mary Hicks Smith was a particularly good example.  Her father, William Smith, was master mariner as were many of her relations so she grew up in a very maritime world.  In 1872 she married James Hayes of Bodinnick, a shipbroker.  James died after only eighteen months and left many of his shares in shipping to his widow. Mary became an independent business woman, buying and selling shares in local ships and also became the business manager (managing owner) of the Perseverance, the Gem and the Koh I Noor.  She owned shares in sixteen Polruan owned ships.  She remained as a managing owner until 1885, astutely coming out of ship management when the decline in wooden schooners was most marked.  She died in December 1907 leaving  a few shares in ships together with her shares in the Capital and County Bank and the Fowey Hotel, reflecting her interest in the new business of tourism.