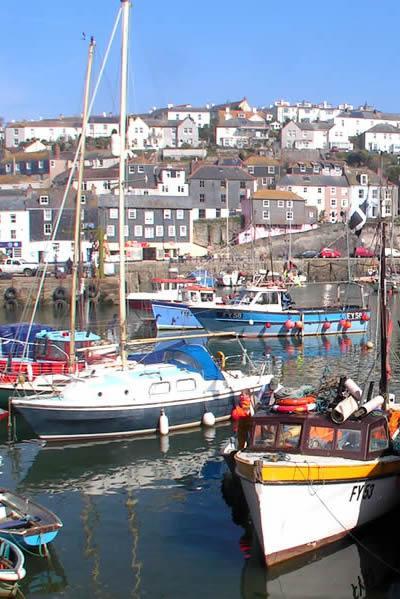 One of the most consistent modern (and incorrect) descriptions of Polruan and even Fowey is to call them fishing villages or towns. Such a label assumes that fishing was a major industry there and, as such, you would expect to find large numbers of fishermen in the census returns and plenty of fishing vessels owned in the harbour. However it has always been a minor occupation even in Polruan where there were just four men listed as fishermen in 1851.

On the other hand Polkerris, Mevagissey, Looe and Polperro can certainly be described as fishing villages and sometimes they exported their catch out of Fowey. The confusion may come because these communities are actually part of the Customs Port of Fowey, which is the designation for the registration of shipping hence all fishing boats have the FY registration. However, that is not the same as the harbour of Fowey, or the Port of Fowey controlled by the Harbour Commission or the town of Fowey.

In the medieval period Fowey was the major port in Cornwall and has always been a centre of shipbuilding and mineral export - tin, copper, and now china clay. There were some fishing seines, one is still remembered in the name Amity Court, and fish was processed here in fish palaces such as Newquay, Prime Cellars and later at Brazen Island.

Our great writer Quiller Couch, known as Q, was also frustrated by this description. In the Prologue to The Delectable Duchy, published in 1893 Q explores his attitude to Fowey through a real or supposed encounter with a journalist who is on a whirlwind tour of Cornwall. He takes him to view the local area and the journalist shows him what he plans to write to his newspaper

It was a surprisingly brilliant piece of description; and accurate, too. He had not called it "a little fishing-town," for instance, as so many visitors have done in my hearing, though hardly a fishing-boat puts out from the harbour. The guide-books call it a fishing-town, but the Journalist was not misled, though he had gone to them for a number of facts.

Helen Doe A Fair and Commodious Haven: The History of the Harbour of Fowey. (Truro: Truran, 2010)