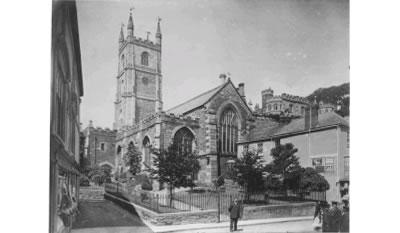 St. Fimbarrus Church, is the parish church of Fowey. Its tower is the second highest in Cornwall and dates from 1460 when an earlier Norman church was rebuilt after it was severely damaged by the French, it is thought, in revenge for Fowey's sea-faring attacks on the French coast. The church marks the end of the Saints' Way, originally a drovers' route from Padstow to Fowey and taken by merchants and pilgrims travelling from Ireland and Wales to France.  This overland route avoided the dangers of the sea route around Lands End.  St. Finn Barr, the first Bishop of Cork, himself took this route on his way to Rome, stopping in Fowey to build a little church.  The Saints' Way is still popular with walkers to this day but St Finn Barr's little Saxon church is long gone as is the Norman church which replaced it.  However the font from the Norman period remains and can be seen inside, as can a fine wagon roof which is 500 years old, and a 400 hundred year old pulpit made from the panelling of a Spanish Galleon.  The church has been subject to several rebuilds and restorations, the last at the end of the 19th century. It was listed as Grade II building in1974, the listing citing the churchyard gateway.

In the churchyard there is a memorial to Fowey's war dead.