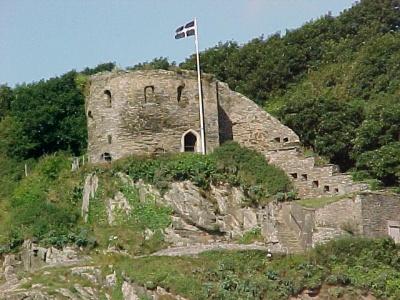 This was built between 1538 and 1542, early in the reign of Henry VIII, to strengthen the defences of Fowey Harbour.  Thomas Treffry of Place and the Fowey Townsmen funded the building of the single tower.  Gun batteries were placed here during the Dutch wars in the 17th century, the Napoleonic wars in the early 19th century, the Crimean war in 1855 and again in June 1940.  Behind the castle, is the Rashleigh mausoleum built in 1871 where William, his wife and daughter are buried.  Nearby once stood St. Catherine's Chapel, twin to the 13th century St. Saviour's Chapel, the ruins of which can be seen on the Polruan headland opposite.