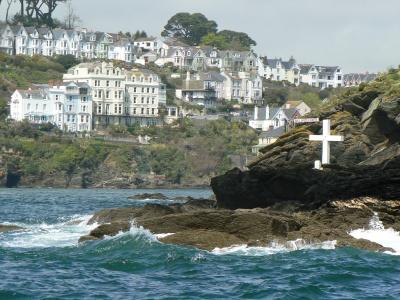 A solitary wooden cross on the rocks at the eastern side of the entrance to Fowey Harbour, the cross was mentioned in 1525 by Leland and is marked on early charts. There are several theories surrounding it but the most widely accepted is that it originally marked the limit of jurisdiction of the Prior of Tywardreath, which included the harbour. One legend tells the story of Joseph of Arimathea, who was in the tin trade and brought his nephew the boy Jesus to Britain. It is suggested that they landed on the rocks here and then proceeded up the hill to where the chapel of St. Saviours was built.  Similarly, the origin of the name is uncertain. One story has it that the monk who collected the dues from the harbour lived at Pont, so Pont's Cross, now Punches Cross. Pontius Pilate is said to have landed here and it is possible that the name Punches is a corruption of Pontius.

This cross, now maintained by Fowey Harbour Commission,  has stood through the centuries as a symbol of good over evil, but is still an important navigational aid, for vessels arriving and departing the estuary.