Surnames of the Fowey Valley

Surnames of the Fowey Valley, a talk by Bernard Deacon.

The AGM on 23 April was followed by a very interesting talk by Bernard Deacon on the surnames of the Fowey Valley which was attended by 21 people.

Surnames did not exist until the 12th century. At that stage an increasing population and lack of available first names gave rise to increasing confusion. Intially bynames were used, eg John the tall. These changed from one generation to the next but these gradually evolved into surnames which took one of four types; occupational, geographical, descriptive or patronymic (that is indicating “son of”). In England there was a long transitional phase from around 1250 to the 1400s during which second names became fixed. This occurred first in the south east and in wealthier sections of society and then spread later to the north and to the poor. Fixed surnames were rare in Cornwall in the mid 1300s, by the 1400s they were common in the east of the county but in the west inherited names were not the norm until well into the 16th century. This delay was partly explained by the persistence of the Cornish language. Cornish language surnames were more common to the west of Bodmin and Tywardreath.
Examples of occupational names which have persisted are Angove (smith) and Trehar (tailor), these were later translated into their English equivalents. As bynames became surnames relatively late in the west there was a tendency for a high proportion to be patronymic, eg Daddow, Clemow and Sandow ( the –ow indicating “son of”), these were the equivalents of Davies, Clements and Sanders. Sometimes the suffix –a is used as in Holla (son of Hal/Henry), Matta and Jacka
Descriptive names, or nicknames, tended not to become hereditary and have largely been lost. A few like Marrack (knight) have survived. A persisting geographical surname is Hellas (Helston).

A History of Cornish Gigs by Anne Curnow Care

A talk rescheduled from last year finally reached us and it was well worth the wait. On a beautiful sunny day, Anne Curnow Care joined us in a packed Fowey Church along with local gig builders, Peter Williams and Maurice Hunkin, to give an informative and insightful walk through gig history and gig building.

Anne is the Secretary of the Cornish Pilot Gig Association (CPGA), a local lady brought up in and around St. Ives harbour who has been associated with gig rowing since the early 1990s and a member of the Association since the early 2000s. The CPGA is the Governing body for the Sport of Pilot Gig Rowing, charged with upholding the specification and heritage of the Cornish Gig.

Anne gave the most interesting and engaging talk about gigs where we learned there are clubs all around the south coast of England, predominantly based in Cornwall but reaching as far afield as Norfolk in this country and beyond. Originally, these boats were designed for pilotage and harbour work, so accordingly the craft are speedy, seaworthy vessels and all follow the lines of the gig, ‘Treffry’, built in 1838. The boats are all built to the same specification and undergo three standardisation tests throughout the build; they are only tagged when they pass all three tests. The boats are owned by the Club, not individuals, and it was stressed how important it is for members of the club to be involved in the building process from inception to naming. Anne made it clear that at the end of the day, Pilot Gig Racing is predominantly about the boat not the crew, club or community it represents.

The talk was enhanced by the lively and entertaining Q&A session with Maurice and Peter led by Anne, where we learned the difficulty gig builders face in sourcing the correct grade and shape of wood necessary to build the vessels (Elm and Oak). Originally this had been locally sourced but this was getting harder due to Dutch Elm disease and the shape and quality of the Oak stems required (no knots!). They shared that their proudest moments, once the vessel had been crafted (and after the money was in the bank!!), was the blessing and naming ceremony and the knowledge the Club was happy with the gig, stressing again the build was more worthwhile if a Club involved itself in the process. Maurice had built twelve gigs with his son Louis and he shared that this was probably a typical ‘father son relationship’, where advice given from experience gained, is stored and saved only to be used later! He is very proud of his son’s workmanship. Peter told us how important the name is to the vessel, the politics around the final choice and how crucial it is to have an experienced sign writer to ensure clarity from the shore.

A hugely informative and entertaining talk. 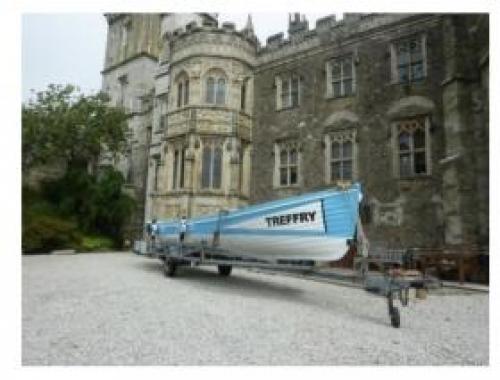 Cornish Bench Ends – Zoom talk by Dr Todd Gray 22nd January 2022
Dr Gray wrote a book on Devon Church Bench Ends and followed this up with a gazetteer of Cornish Church Bench Ends. His fascinating talk took us on a tour of many Cornish Churches focusing on the differences between the bench ends found in this county and those found elsewhere.
Mostly dating back to the early 16th Century some of these decorative works of art can still be found at over 80 Cornish Churches including:- Altarnun, Boscastle and Zennor. Their unique features include imaginative and extraordinary images of mythical beasts and are hewn from single pieces of oak.
Carving styles tend to be localized, generally within a 10 mile radius, from what Dr Gray has found in his travels. This has lead him to conclude that individual carvers (including Bretons) were at work, although written records to tell us who created these artworks are scarce.
Originally there were around 225 bench ends, today those that remain are in danger of removal and destruction. Todd encourages us to visit our historic churches, appreciate these amazing survivors and help to keep them in place by giving a donation to the Churches which still have them.
Avril Sutton 24th January 2022